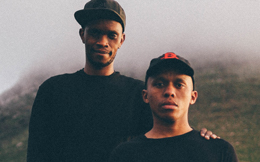 STAB Virus are the South African duo of Siphe Tebeka and Makonwabe ‘Audiojerk’ Bekwa. Going against local culture they focused on producing electronic music, a far cry from their traditional roots.

Their debut release in 2016 was signed to the titantic Suara label based in Spain, run by the techno visionary that is Coyu. The ‘Unknown Song’ has received widespread support from some of the biggest names in the industry among them none other than Pete Tong and Laurent Garnier.

2017 was a jam packed year of touring playing high profile shows including the mighty Awakenings festival, The Ultra Resistance stage and a host of club shows and extended sets. New releases on Teknotribe, Triplefire music, Katermukke and Senso Sounds has further boosted their prominence.

Individually Audiojerk got global attention when he performed in 2 @ Boiler Room’ shows at ADE 2016 while Siphe has been touring his Live act showcasing his love for the deeper side of house. Expect nothing but the best from these two as they break away from anything close to traditional and carve a fresh path through the Techno universe.