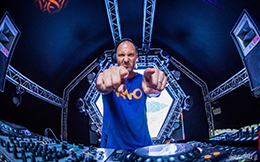 Nano Record’s label boss, DJ, producer and the driving force behind Nano Records, Regan is a passionate music lover who has helped launch and promote some of the biggest acts currently in the global Psy-Trance scene. His ear for talent and the best tunes aside, Regan has been rocking dance floors since the mid nineties as a DJ and music producer, having first played in bands and studying vary styles of music before falling in love with electronic music and the psychedelic experience.

Regan is a music addict, with a passion to expose people to new sounds at every possible opportunity. His love and support for Psychedelic Music and the culture that surrounds it is a lifelong pursuit which is echoed in the festivals and events he produces around the world, including Origin Festival (Cape Town/South Africa). DJing for more then two decades now, Regan has had the honour of playing at many major international events at peak times, and loves nothing more then settling into a marathon long set and taking the dance floor on a non-stop journey.

Regan is now based in the UK, while still traveling back frequently to South Africa to produce his festivals there, and gigging worldwide.