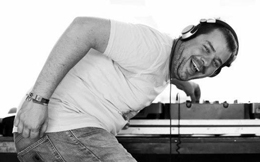 Anestetic is the stage name for João Trindade.

A long time friend and supporter of all at NANO, Anestetic has been DJing for nearly two decades.

His first steps on stage happened in 2000 playing at iconic Lisbon venues before spreading his net and performing to a wider community, first around Portugal, playing for all the major promoters there including the famous Good Mood Full Moon Parties, Insomnia Festival, Boom Festival (2006, 2010, 2014 & 2018) and many more. While on the International scene, Anestetic has been busy, performing in Spain, France, Germany, Italy, Sweden, Finland, Norway, Holland, Hungary, Swiss, England, Austria, Brazil and South Africa numerous times. Musically he was a big supporter of darker twilight sounds working with labels like Timecode and Sangoma Records for a long time, and he has released two compilations and is currently working on a third. Having spent a good part of his story behind the scenes too, João is deeply involved in the Portuguese Psy scene and some of the biggest events in the world, and has a real understanding of the different perspectives, from event production to artist to music lover that makes up the scene.

Anestetic is a proud Label Dj for Nano Records since April 2018.